Adderall and anxiety have a complicated connection since Adderall may sometimes induce anxiety and sometimes heal it. To worsen matters, both children and adults with ADHD commonly suffer from anxiety and depression issues. It is hard, difficult, and occasionally harmful to treat everything at the same time. 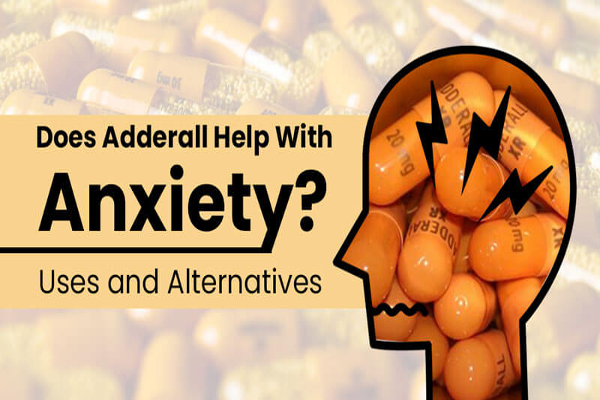 Is Adderall Effective for Stress and Anxiety?

Adderall may either alleviate or worsen anxiety. Its influence is decided by what is already going on in your mind. If you have attention deficit hyperactivity disorder (ADHD) or a handful of other linked mental health conditions, Adderall may help you relax.

Otherwise, Adderall is more likely to aggravate your anxiety problems. Adderall is the brand name for a prescription medicine known as amphetamine-dextroamphetamine, which is a potent stimulant. Surprisingly, its stimulating properties are what cause ADHD patients to feel calm.

Many students and professionals take it illegally as a study drug. While Adderall improves attention, it may also make those who do not have ADHD feel nervous rather than relaxed. The discrepancy might be due to differences in brain chemistry and how Adderall functions in the brain.

It is crucial to remember that Adderall is seldom used for anxiety. Can it, however, assist with anxiety? No, and it often worsens anxiety symptoms.

Adderall is a stimulant that improves a person’s attention span, motivation, and energy. It is not an anti-anxiety medicine. Students commonly misuse the substance, a mixture of levoamphetamine and dextroamphetamine, to stay alert and avoid sleepiness during extended study sessions.

How Does Adderall Function?

ADHD seems to be connected with low levels of a neurotransmitter called dopamine. Dopamine is a vital component of the human brain’s reward circuit, which is essential for motivation and attention. One of Adderall’s principal benefits is enhancing and sustaining dopamine levels, therefore alleviating ADHD symptoms.

Its effects on dopamine levels may contribute to the prevalence of Adderall misuse, which often leads to Adderall addiction and physical dependency.

However, brain chemistry may not be the direct cause of Adderall’s calming effect.

Does Adderall make you feel better?

Remember that ADHD is a mental health issue that makes basic areas of life much more challenging. When someone with ADHD gets therapy, they often experience relief. Simplifying things alleviates anxiety.

Does Adderall Make You Nervous?

Adderall usage has been linked to increased anxiety, especially for those who do not have attention deficit hyperactivity disorder. It may come as no surprise that Adderall and other stimulants might produce anxiety symptoms. Comparing Adderall to another popular stimulant, such as coffee, may assist in explaining why.

Both Adderall and coffee are stimulants of the central nervous system. Adderall may produce the same jitteriness as caffeine and the same sensitivity. Stimulating autonomic functions such as elevated blood pressure and heart rate may also raise anxiety, especially in those who have an anxiety condition.

Seizures, strokes, mood swings, panic attacks, and psychotic episodes are among the most significant adverse effects.

Other Anxiety Disorders and Adderall

Depending on the kind of anxiety, Adderall may give temporary relief from the symptoms of some mental health issues. The five anxiety disorders are listed by the US Department of Health and Human Services as follows:

While it may give temporary relief for certain anxiety problems, the way it interacts with the brain’s chemistry can also produce greater anxiety.

While treating ADHD symptoms may assist with anxiety, any possible treatment with anxiety is typically appreciated. Furthermore, it is not uncommon for persons misusing Adderall as a study aid to simultaneously be suffering from anxiety. However, you should avoid combining Adderall with numerous popular anxiety and depression therapies.

When taking Adderall illegally, the risk is much greater. It would not be unusual if persons suffering from drug use problems sought therapy for sadness and anxiety, perhaps resulting in a deadly combination.

Will Adderall Aid in the Treatment of Social Anxiety?

Adderall is unlikely to alleviate social anxiety and may potentially exacerbate it. However, alleviating ADHD symptoms may lead to increased confidence and decreased anxiety.

Anxiety and ADHD may have major and long-term consequences in a person’s life. Having to deal with both at the same time is more than difficult. The appropriate therapy may make all the difference, but it’s critical to understand your choices and the dangers that come with them.

7 days ago Fred B

Homeopathic Treatment for Asthma – The Safer and Smarter Alternative

1 hour ago Fred B